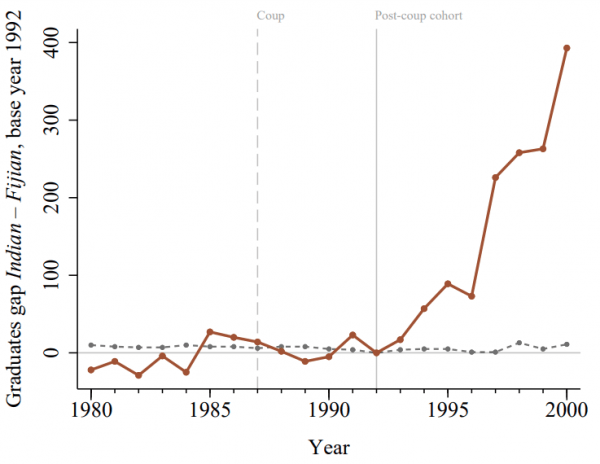 This second post in the series summarises four recent studies on brain drain after a brief methodological digression. The last post stressed the importance of getting the time horizon right when evaluating a possible brain drain, allowing any dynamic responses to play out.

Another challenge is attribution. It is not enough to compare skill levels before and after migration, as skill levels are affected by more than just migration. Similarly, naïve comparisons between migrant sending and non-sending areas are also inappropriate, since migrants and the areas they come from tend to be different. To answer causal questions, we need counterfactuals: credible estimates of the state of the world without migration.

Experiments – like randomised controlled trials used to test the efficacy of new drugs – often provide the most credible and certainly the easiest to explain counterfactuals in social science, with “control” groups differing from “treated” groups only in whether they were randomly assigned the treatment. Visas sometimes cannot be randomised (although this is clearly the fairest way when there are more people who what to move than there are places) so good empirical researchers instead seek to approximate experiments though a careful understanding and modelling of selection into the program.

Migration lotteries (for example, the US Diversity Visa and New Zealand’s Pacific Access Category and Samoan Quota) offer real-world experiments helpful for understanding the scale of the challenge at hand. The 2010 study comparing lottery-based and observational estimates of the impacts of migration to New Zealand from Tonga finds that most non-experimental estimates are off by between 20-83 per cent. This level of bias in an estimated effect size is alarming, and may be enough to reverse the sign of the effect and substantive conclusions. In describing what we have learned since Clemens and McKenzie, …read more